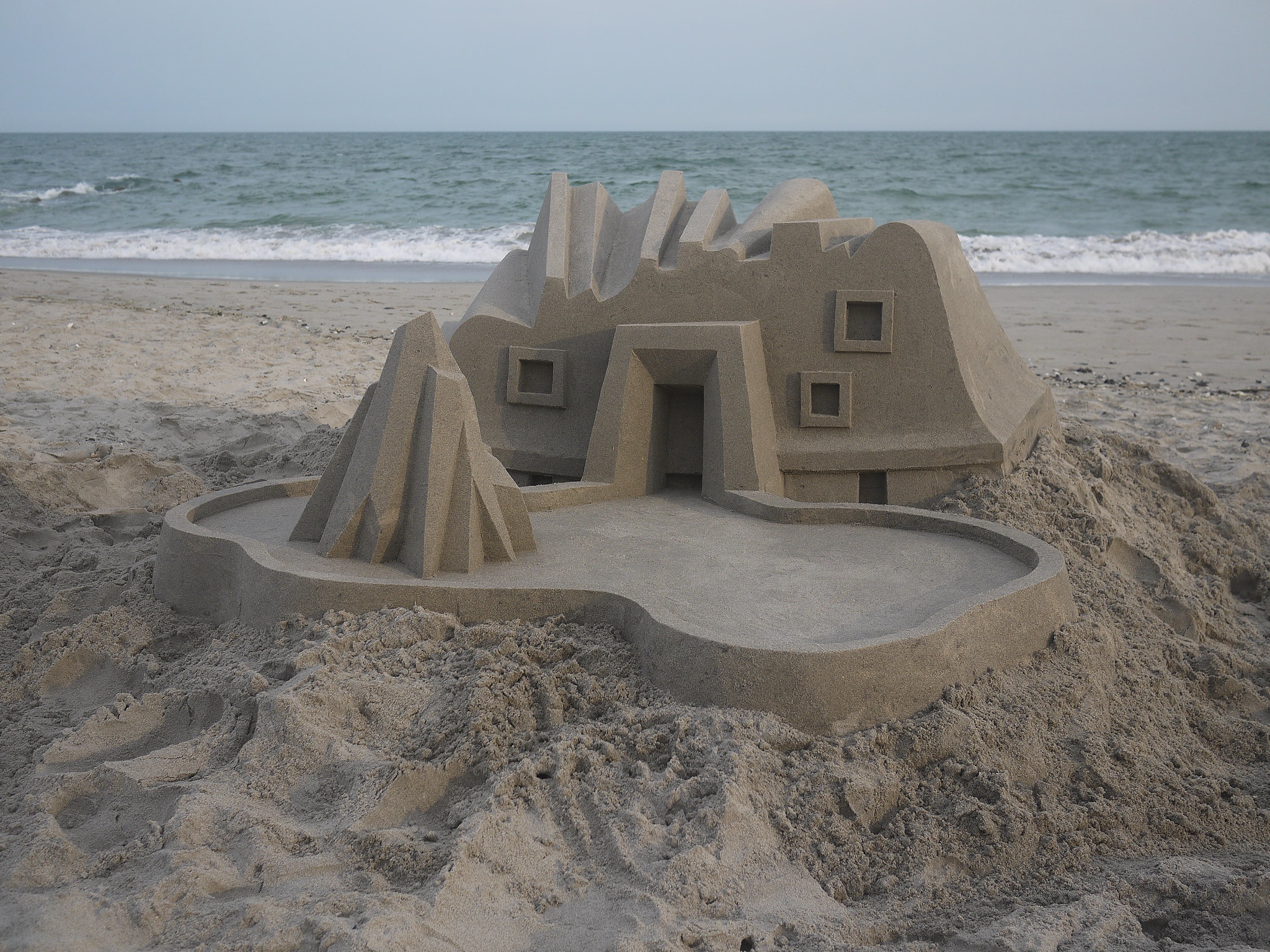 Heifetz was bending Mendelssohn to his will, and vice versa; her iPod Nano almost drowing the sound of the waves crashing dozens of feet away, when Vera finally forgot her mother’s words, spoken hours ago, before she drove away.

“Every year you leave! Every year I’m alone for a whole week! What if I die? What if someone breaks in, and wants to rape me? You’ll find me dead, on the floor. Is that what you want?”

“Mamma, if someone breaks in, shoot them dead. Put a bullet in their brain, like you learned at the shooting range.”

“How can you ask me to do that? I could never do that! Just stay. I promise I’ll be quiet, and let you write in peace.”

She had believed that once. Bad choice. Her mother was one of those people that had to talk. She had to, or she’d lose her mind. Her lips were always moving, always forming the next sentence, no matter how repetitive, how drenched in minutiae, she had to say it. Vera made her beach-house reservation every year, at the same time, and for the same period of time, right on the off-season fence, when the water was still warm, but the weather had changed enough to detract the noisiest, most annoying beach goers.

She loved Horsehead Island. September was dying as it delivered October, but this year temperatures were insanely warm. She had arrived the day before, late in the afternoon, and after she collected her key from the rental company agent, she had collapsed in bed with Pod41, her tuxedo cat. He purred and kneaded her, “It’s dinner time,” she had heard  his little paws say. But she had rested on the naked mattress for close to an hour, listening to nothing but waves crashing, and her beloved pet. Perfect. Later, she would feed him, then unpack, wash the bedding the agent always claimed was clean, make her bed, go to the store, buy tequila and Cheetos, and write. Write in blissful silence. Nothing but the ocean, and her keyboard.

Every morning was the same. She got up in time to watch the sky turn orange, and to watch Pod41 eat his meal. Then she would let him sleep, and head to the private beach, where she made her sculptures. I play with sand. That’s what I do, she thought, when she imagined she was being honest with herself, but those castles were works of art. Tourists from other rental homes would walk by and admire the lines, the perfect symmetry of her creations. The smart ones stayed away and respected her privacy. The idiots, as she called them, walked over to say hello, and discuss her castles. She ignored them pointedly; never looked at them, until they walked away, uncomfortably at best, or mumbling insults at worst. She didn’t care. This was her time.

“Jesus, it’s hot. How can it be almost 90°? Madness!” But she had packed her iPod, her tools, and a towel, and had set off to make a new castle. It would only last until the tide washed it away, but until then, she would play, and tell herself the same story about its tiny inhabitant. Now she sat on the sand, and began, while Heifetz kept her company. She worked, and as she sank into the rhythm of the sand, the beginning lines of that modern home, she thought of him.

This is your home, Little One. Come talk to me. Tell me what you like. It always started that way. A secret conversation in her mind. One-sided, but fun. Today, the music almost hid the echo of a voice.

“It’s such a small house. Why have you made it so small?”

She didn’t hide her annoyance. Someone had obviously walked over to her unannounced, uninvited. But they would take the hint. She didn’t look up, or around. She certainly didn’t answer. She kept working, satisfied to imagine she would soon see whoever it was walk away and leave her alone. If they didn’t… now she wished she had brought her Taurus with her. She blinked the thought away, and sank into her activity with her mind.

Do you like this door? This is your door. Where you come in after work every day. And here I’ll put a set of windows. Do you like it?

“It’s beautiful.” The words were clear now. She realized the music had died when the concerto’s movement ended, and never came back. She groaned internally when she remembered she had not charged her iPod after she arrived. No matter. She could still ignore him. But she didn’t. However, she would not look at him!

What an odd question. “Sure, why not.”

“And I love the door right there. That place for the windows is perfect.”

Now she wanted to look at him, but stubbornly refused. That will only encourage him. But something alien had taken control of her lips, and she found herself helpless to stop them.

“I thought so too. See, you can imagine the living room inside. Facing away from the beach, but when he has guests, they can join him on the deck, and they can have little drinks, and watch the sunset, and talk of different things.”

“When I have guests. But I think… I only want one guest.”

Her heart was pounding. Why wasn’t she terrified? Why couldn’t she look at this rude intruder, this mad intruder, and shout at him to go away? Why did she feel she was being pulled by a current bigger than herself? She looked down and saw she had stopped sculpting. She rubbed her hands together, and started again.

“One guest is fine, but there’s room for more. He likes people, this guy. He loves people. He’s a people person. He’s kind, and he likes cats. He doesn’t like tequila, but that’s fine. More for me. He steals my Cheetos, but only one at a time. I started counting them, and finding orange dust on his little fingers and mouth, but he lies to me about it as though I’m too stupid to tell. He smiles when he lies, so I know he knows I know.”

No response… good. Maybe he was gone. But she went on.

“He likes to talk, but he knows when to be quiet. He can watch, and be happy watching. He can find things to do for himself. He’s witty, and gives good advice. He doesn’t dwell on sorrow for too long. He’s different from me that way. He can watch me cry, and he knows what to do. He’s-“ She realized she was rambling, and saying too much. She was shocked to see a little girl staring at her from across the castle.

Her voice was sweet and crystal clear when she asked, “Who are you talking to?”

Vera looked at her for a moment, and spotted the girl’s mom walking along the beach, distracted by an intense conversation on the phone. She would take the child away soon.

“The man. The man standing right here.” Now she looked around, and saw no one. “Well, he was here before.”

“There was no one there, ever. We saw you from far away, and there was never a man.”

“Chrysta!” called her mother, when she finally noticed her little girl was not by her side. Chrysta ran off, kicking sand in all directions, but not before giving Vera a disgusted look.

Vera sighed. Oh, please, let it be the end of that. She looked down at her castle, and tried to find her thread of creativity again. She stared for a long time, and gave up. Fuck it. It’s time for lunch anyway. She got up, gathered her belongings, and went back to the beach house. Mmm, pizza time! She popped a Totino’s in the oven, and looked around for Pod41. She saw him bolt downstairs, a blur of fur that stopped at her feet. “Hi, kitty! Did you have fun without me?” He didn’t accept being picked up, much to her surprise. He left her side, and walked back toward the stairs. He stood on the first step, and stared at her, his tail whipping intently.

“What? What do you want?” His eyes only opened bigger.

“Oh, I hate it when you do this. Just tell me what you want.”

Pod41 jerked his head towards the stairs, and glued his eyes on her again. “OK, upstairs we go.” As soon as she said that, he bolted upstairs. “Hey, wait for me!” She ran after him, and found him in her bedroom, scratching at a wooden floorboard. When she walked over, he stopped, and renewed his staring stance. She looked down, and saw nothing unusual. “What, you demon cat? Never seen wooden floors before?” Nothing. The cat wasn’t talking, so she knelt, and felt the board with her hand. It was lose. She began to work it, but couldn’t budge it. “Wait! I’ve got just the thing!” She ran back to her beach pack, and fetched a chisel. Back in the bedroom, she pried the floorboard up, placed in on the floor, and peeked in at the narrow space beneath the floorboards. She blinked, and refused to believe what she saw.

Inspired by the work of this amazing guy.

This site uses Akismet to reduce spam. Learn how your comment data is processed.